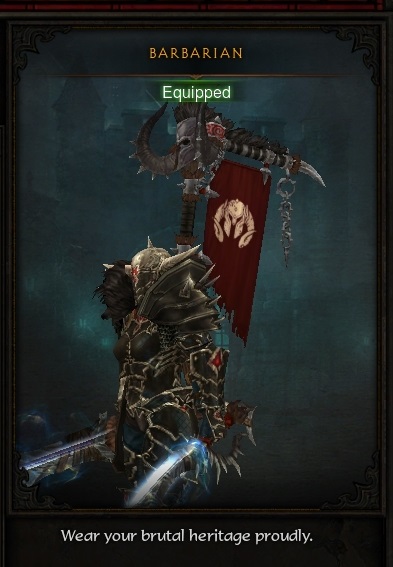 Barbarian. The last of the RoS-era Diablo 3 classes that I still needed to master for my wings. There was some misery to be had here, partly because I really have no clue how to play a barbarian and partly because of the dungeons being awful.

I had most of the Might of the Earth set laying around, so I focused on that dungeon first. This one was very hard for me. The objectives were to use leap, ground stomp, and earthquake in under 6 seconds on every elite, and to freeze and kill at least 1 enemy every 10 seconds for one minute. These felt pretty daunting, especially since I don’t know much about playing a barbarian. On my first attempt I got the freeze objective but didn’t even hit a single elite with the required 3 attacks. As I kept attempting it, I lost count of my failures. Either the elites would die too quickly, or more often the cooldown on earthquake would not quite be finished when I engaged the next elite. The map is quite large but I got used to it over the course of many attempts, and when I finally mastered it I had almost a minute leftover. Success came when I slowed down and made sure all my abilities were ready before I engaged each elite.

Second on the list was the Immortal King’s Call. This one goes up there with the Invoker’s set dungeon on the list of the easiest ones to master. Your objectives are to kill all of the elites while the 400% damage bonus from the set is active, and to kill 150 enemies while Wrath of the Berserker is active. I one-shot this one, without looking at the map and without even really taking the time to familiarize myself with the requirements or my abilities. I had an entire minute left on the timer too. If you’re looking for an easy one to complete your season’s journey, this is a good bet.

Raekor’s was up next. The objectives are to hit 15 different enemies with a single furious charge (x6), and to hit 15 enemies with a 3750% damage bonus spender. Both objectives were pretty easy independently, but it took 2 tries to get both done and still have enough kills for the mastery. The map is one big loop so it is deceptively simple, but there are a lot of corners and side passages for mobs to hide in. Luckily all those corners also make it pretty easy to group up enough to hit with your furious charge. Overall this one wasn’t bad.

The very last dungeon I needed to complete Barbarian mastery and to complete the achievement for all the pre-necromancer masteries was the Wrath of the Wastes dungeon. Little did I know that it is hands down the worst set dungeon in the game. The first objective isn’t too bad, Rend 10 enemies at once (x5). There’s plenty of enemies and once you get the hang of the layout you’ll know exactly where you’re likely to find big enough groups. And you will be learning the layout. Intimately. Because the second objective is awful and you will fail a lot, or at least I did. “Do not take any physical damage for the duration of the dungeon. A tiny goblin hits you? Fail. A swinging scythe hits you? Fail. Something sneezes in your general direction? Fail. After about 3 attempts I got my fancy Wings of the Dedicated (for completing every set dungeon). They’re very pretty but sadly I’ll probably never wear them since the mastery ones are way cooler. It took me three hours and I don’t know how many attempts to actually master this dungeon. All I can say is pray to RNGsus and be super careful.

They’re not the mastery wings, but they are still very pretty…

And with that I have completed all of the set masteries except the Necromancer. Some of the Barbarian ones were rough for me, even more so than the monk. They certainly did nothing to make me want to play this class in the future. At this point I wish I had saved something I like better for last, but for now I’m glad it’s over. I’ll be sharing some of my overall thoughts in a follow-up post soon.

One thought on “Barbarian Mastered”