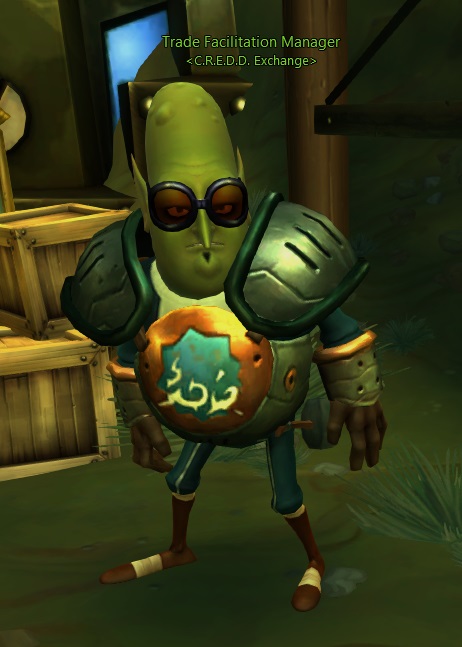 I’m pretty sure this guy is sick of seeing me.

I have a confession. I’m a CREDD addict. It started so innocently, I knew I was about to head into some tight financial times, so I saved up some plat and bought a couple CREDD as soon as I hit 50 and had access to that sweet sweet daily quest money. “Hooray! I can get through the next few months and not have to worry about the subscription cost,” I thought. Soon I had earned back all the plat I’d spent on CREDD, and was going happily about my business. “Oh I’ll just check the CREDD prices,” HAHA.

Fast-forward to today, and I have enough CREDD saved up to pay my subscription through April. The price has more than doubled since I bought my first one, but I still make about enough in a full week of dailies and my normal messing around to buy one if I choose to. I’m especially grateful for CREDD right now, when my play time is extremely limited. It’s hard to justify paying a sub in a month where you know you won’t get many hours of play time, but when I can earn enough in-game currency during normal play to subsidize my costs, then why not stay subbed? It turns the game into a fun stress-relief during a busy time, instead of either removing it or making me feel guilty for not playing when I’ve paid for it.

So why is CREDD on my mind even more right now? One word: Megaserver. I made the mistake of checking the price of CREDD on all the servers I have alts on. It turns out that my home server has the lowest price of any of them. So I snapped some up while the getting is good. I expect after the launch of the megaserver that the price of everything, CREDD included, will fluctuate quite a bit. I’m betting that when things stabilize the price of CREDD won’t dip back below my server’s current prices. If you’re on a server with low prices, you might consider getting while the getting’s good. Alternately, if you’re the gambling type and on a server with high prices, you could sell now and hope you can catch some for a bit cheaper on the megaserver. Or you could just avoid the whole thing and pay your subscription with real money like most folks.

I’ll just be over here, obsessively checking the CREDD market.

Lately I’ve been slacking off in-game a bit. Real Life is going to be coming down on me pretty hard for the months of September and October, so my play time will be much more sparse for now. I’ve gotten in the habit of just logging in to do some dailies, puttering around my house for a few minutes making some upgrades, and then calling it a night. Last night, however, I decided to be a bit more social. First I popped in to be a spectator at a race hosted by KatiaRacer (recently featured as the epic moment of the week on the Nexus report!). I had seen it advertised in housing chat occasionally but this was the first time I had actually stopped by. I had a fun time and I’d encourage anyone on Evindra to check it out. Perhaps I’ll actually race sometime if I can get a few practice laps on the course in first!

As the race was ending, a call went out looking for more to kill Scorchwing. I managed to join up just in time for a quick summons and we went to work slaying the flaming chicken. I enjoy seeing familiar names of players when I’m wandering around questing, grouping up, or just visiting random houses, so it was fun to see some folks from the race also in group with me. After Scorchwing we kept enough people in group to go grab Elyonia and also do Drusera’s Tree event.

All in all it was a very fun night, and I was more social than I had been in quite a while. It reminded me why MMOs can become such a huge part of our lives. It’s not just that they are a fun diversion, or that the gameplay compels us. It is also that we get to interact with people, and hopefully those interactions are more positive than not.

Which brings me to the question on a lot of people’s minds right now: What is going to happen to our community when the Megaservers go live? If you haven’t heard yet, Cougar announced on the Nexus Report this week that they are officially moving forward with plans to move everyone onto just one PvP and one PvE server for each region. As a proud resident of the sole NA Roleplaying server, I am curious what will happen once we are merged with the bulk of the general PvE population. On one hand I’m excited, since currently I have no room for Dominion alts on my server, so the megaserver will give me access to the Dommie side RP community. It will also be nice to have a more full world, with hopefully easier grouping for events and a more robust CX/AH market.

On the other hand, it means dealing with more names like XXKillYouLulzXX, more potential for griefing of RP, higher competition for resources and crowded daily questing areas. I think one of the coolest things about my server now is that our housing zone chat is quite alive and generally helpful and interesting. The other servers I have seen all seemed to be quite silent. My hope is that the culture of Evindra manages to persist on the new megaserver, and that the influx of new blood will help it grow rather than shouting it down or turning it into a clone of the annoying capital city chat I’ve seen on almost every server in every MMO I’ve played.

Currently I’m pretty optimistic about the megaserver news. I hope that the good will far outweigh the bad. For now I have time to enjoy my RP server, start thinking of last names for all of my characters (which will be required once the new servers launch), and get some practice on the racetrack!