I’m still slowly moving forward with the goal of mastering all of the set dungeons in Diablo 3. So far I’ve finished the Demon Hunter, Wizard, and Crusader ones. Next I decided to work on the Witch Doctor mastery, since I play that class fairly often and had all of the sets laying around. Sadly even with all of the time I spent with the class, I had only mastered one dungeon so I still had plenty of work to do. At least the pennant reward for this mastery looks neat! 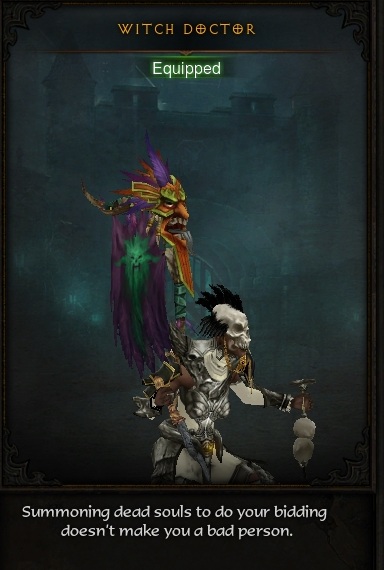 The set dungeon I had already completed was the Jade Harvester’s. I decided to try it again for this project just to remind myself what it was like so I could record it here. The objectives are to harvest 15 enemies (x10) and kill a total of 100 enemies while they’re affected by both haunt and locust swarm. I got it on my first attempt. It definitely helped that this is the set I’m most comfortable with and I had plenty of choices for legendaries to make it work. I suspect the biggest issue with this one would normally be clearing everything within the timer since the map is fairly large and convoluted.  I used Shukrani’s Triumph in the cube which let me spirit walk until I attacked or found an enemy, which made for a speedy, easy run.

Next up was the Helltooth Harness set dungeon. The first objective here is easy. “Do not take any poison damage” can be utterly trivialized by cubing Mara’s Kaleidoscope. I’m sure it is possible to do without this item but why bother if you have one available? The second objective is to kill 20 enemies with a single wall of death (x4). This was the sort of objective that gives me trouble. First, you have to be able to 1-shot the small enemies with your wall, which hopefully shouldn’t be too hard. I used a Jeram’s Bracers to increase damage to make sure of this. More importantly though, you actually have to find or make groups of 20 enemies. It was tricky to do since the dungeon has a lot of little pockets and pillars that make it hard to find and group up the mobs. I had no trouble running through and killing everything in time, but it took me 5 or 6 tries to meet this objective. If RNG is kind and you get good pack placement this one should be easy.

After that I worked on the Arachyr’s Mantle dungeon. The easier objective here was to let your hex toad lick 30 enemies. On my first attempt I was so eager to get this done that I botched the other objective. Killing all of the elites while they are both webbed and piranha’d was tricky simply because they got accidentally killed by other things first. On the plus side there aren’t that many enemies and the layout is fairly straightforward so eventually I just ran through to find the elites first and then let the toad mop up for my 30 licks. The other good thing about this one is it didn’t require much in the way of specialized legendaries other than the set itself. It took a few tries to get the hang of what I needed to do but was definitely easier than the Helltooth dungeon.

The last of the Witch Doctor dungeons was Zunimassa’s. This one asks  you to grip 150 enemies in grasp of the dead, and to avoid getting into melee range with anything. That second requirement really slows you down, because you can never risk running ahead and getting too close to an enemy. With reasonable gear things should die quickly to your swarm of pets before they get to you though. I managed to 1-shot this one without even looking at the map ahead of time, so I’d call this one very easy.

Overall these were way easier than I expected them to be. Since I already had all the gear I needed I managed to knock all of them out in a single evening. I’m getting close to my goal but the next two classes are ones I’ve never played so there will be some down time while I level and farm gear for them. Still, I’m getting close enough that those awesome wings look like an achievable goal now!