Shoutout to my friend Mor, who suggested the topic of today’s post. FROGS!

Frogs are some of my favorite creatures. I’m not really sure why I like them so much. Maybe it is their cute little froggy faces, or their weird amphibian life cycle, or all the crazy colors they can be. All I know is I love frogs! That’s why I’m so happy that there are new froggy friends to enjoy in BfA.

I’ve already talked a bit about my love of Krag’wa, the enormous frog Loa in Nazmir. Krag’wa’s burrow is surrounded by naga and blood trolls, but he’s knows he can take them. He is worried about his children though. I’m not sure if they are literal or metaphorical children, but either way the the naga are stealing frogs and doing mean things to them. I happily murdered a bunch of naga to save the adorable froggies. Interestingly, there seems to be a connection between the crawgs and Krag’wa. Are crawgs what happens to Krag’wa’s spawn when they get corrupted? Or does Krag’wa just watch over all the weird swamp creatures? When you rescue a tiny crawg during a quest, Krag’wa tells you he can’t help it, and asks you to watch over it.

There are “spawn of Krag’wa” all around Nazmir. There’s even an achievement for finding all of them and sending them back home to the burrow. Although little compared to Krag’wa, these babies are the size of a large dog. I would love to have one as a pet, but I wonder what they would eat? Something that big would have to eat birds instead of bugs! 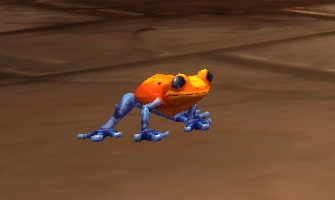 If you really can’t get enough of the Krag’wa-model frogs, there’s good news. For only 75 polished pet charms you can get Tragg the Curious to come and join you on your adventures! This was one of the first pets I bought this expansion. Speaking of battle pets, there are even more frog pets to collect. There’s both wild and vendor pets with a new model that looks like a poison dart frog. They are extra cute, and they can have some pretty useful moves for pet battles too!

Lastly there’s the amazing frog mount. It has been datamined, but there seems to be no way to get it in-game at the moment. I really hope that they make it available soon. I need to be able to hop around the swamps of Nazmir and strike fear into the hearts of my enemies from atop my very own riding frog!

That’s enough of my love of frogs for a bit! Do you love frogs too? Or is there another new model in the game that you’ve fallen in love with?