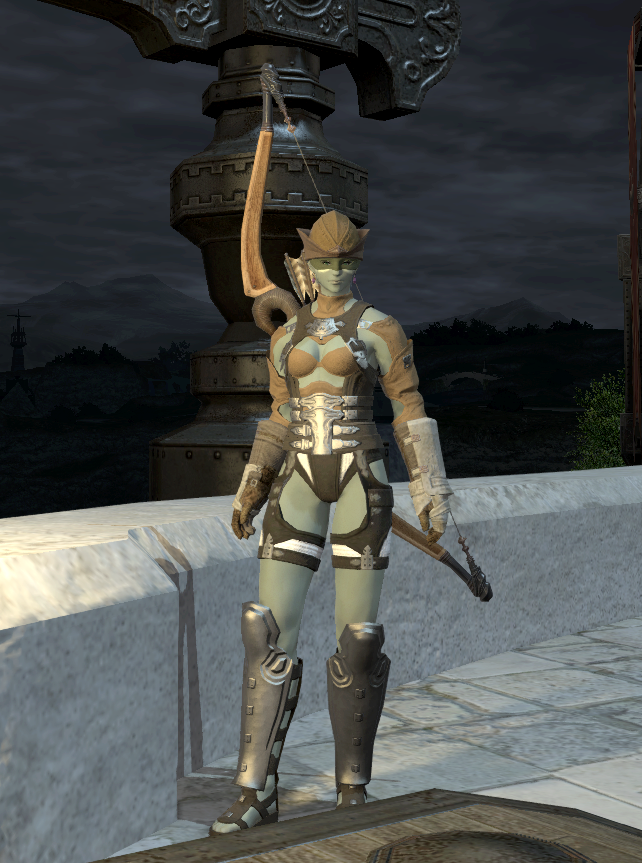 I’ve been playing more FFXIV than anything else for the past week or so. This has led to some fun times and some questionable fashion choices. Not that anybody would choose to wear this outfit if it weren’t the best available gear for the level. The subligar levels are not kind.

Palace of the Dead got added to the game right around the point when I was drifting away, so even though I was subscribed at the time I never ran it. Since I’ve been back I’ve been making up for lost time, chain running it to level some alt classes and score a sweet weapon upgrade for my scholar. I waffled a lot over what class to level. I started with my ninja since that’s closest to being done but by the time I hit 55 I needed a break. Then I decided I wanted to level all my low classes together so I could start getting rid of lowbie gear. I managed to get everything to at least 26 or so before a clear winner emerged. So now I find myself leveling a bard.

Barding it up in the random levels of PotD is a super relaxing time. Unlike ninja, where I feel like I’m playing whack-a-mole with my ability buttons, bard has a rotation I can keep on top of with relative ease. It also keeps me safely out of melee and back in my comfort zone, as far away from angry monsters as possible. Running the 51-100 floors means the exp is coming at a furious pace, plus I can start working on more weapons now that my scholar’s is fully upgraded. I suspect when I hit 50 and the exp slows down I might get bored and swap to something else for a while, but for now I’m having a blast.

Meanwhile my scholar is also making progress. On the nonsense front, I’ve moved to the zodiac stage of my relic weapon quest thanks to my old FC mate who was gracious enough to bake me some sort of horrible eel pie so I could finish the prior step. Now I just need to farm some light to finish that off so I can start on the Heavensward version. Let’s all take a moment of silence in memory of my sanity.

In the slightly-less-nonsense realm, I’ve continued to make steady progress gearing up. Notable additions include the previously-mentioned weapon from PotD, and the healer hat from Dun Scaith. The hat came with a side of salt, since I won it while running with my white mage buddy who desperately wanted it for transmog but had already won an item on the previous boss. Ah, those delicious white mage tears. To add insult to injury I immediately glamoured it into the scholar tophat because the scholar tophat is the best tophat. Sorry friend!

I’m not sure if I’ll get to try out my new hat at our weekly FC raid night this week since tonight is some sort of holiday or something. I am sure that I’ll be spending a lot of time in Eorzea this week though. Hopefully it will be enough to get my bard far far away from the subligar levels for good.